Updated and stricter travel restrictions for Denmark The Danish travel restrictions have been updated. All passengers must present proof of a negative COVID-19 test upon arrival to Denmark. From January 7th until February 7th there’s a ban against flying to Denmark without a negative test result. All passenger flights from the United Arab Emirates to Denmark are canceled from 22 January 2021 to 2 february 2021. A COVID-19 test from Dubai is not recognized as valid documentation for entry to Denmark. The restrictions are being updated on a continuous basis. Please keep updated concerning the most recent restrictions at https://coronasmitte.dk/en

A total of 1,987,766 passengers travelled through Copenhagen Airport in February, a decline of 0.4 per cent. However, with 2019 being a leap year, February had 29 days. Adjusted for the extra day, the decline was 3.7 per cent.

The main detractors were long-haul intercontinental routes out of Europe, resulting from much fewer departures and lower demand on departures to and from Asia. Towards the end of February, short-haul European routes were also affected, and in early March that trend has sharply accelerated.

“During the first ten days of March, the number of departures and travellers in and out of Denmark have dropped by one third.  This is something we’ve never seen before. The situation is developing much faster and more dramatically than what happened during the financial crisis, after 9/11, the ash cloud and any other event that has impacted on aviation since the Second World War,” says Copenhagen Airport CEO Thomas Woldbye.

Health crisis and economic crisis
"This means that not only do we have a serious health crisis, we are also facing a potentially serious economic crisis that could put Denmark’s connectivity to the world – our mobility – under severe pressure,” he emphasises.

The crisis will impact not only airlines and airports. It will also affect large parts of the business community. For example, 32 per cent of Danish exports by value is moved via air freight. The crisis has also been a major blow to the experience economy, impacting hotels, cultural events and venues as well as restaurants.

“There are much fewer tourists and business people flying to Denmark these days and the effect is really noticeable. In Denmark, many people have cancelled their trips, and the drop in demand has made the airlines cancel more and more departures and arrivals,” says Woldbye. He warns that the crisis may have long-lasting and damaging consequences for the country.

Connectivity is vital for Denmark
“For a small, open economy like Denmark’s, it’s essential to maximise our connectivity to the world. That connectivity is now under threat. It means that the Danish economy could come under pressure if we don’t respond in the right way. It’s important that we focus on how we can best minimise the overall costs to Danish society,” Woldbye explains and he continues:

“We have to make sure that fear doesn’t overtake common sense. Fortunately, the Danish government and the rest of parliament are very concerned with tackling the current health crisis, and they are also making every effort to prevent the situation from becoming a full-blown economic crisis. Businesses, the government and the labour market must join forces and work to curb the impact of the crisis and steer the country through it, limiting the damage as much as possible and preparing the country for when the Corona crisis subsides,” says Woldbye.

Domestic air traffic continues to fall in 2020. Domestic passenger numbers fell by 8.1 per cent in February to 100,130 passengers travelling between the Danish airports.

For 2020 to date, Copenhagen Airport has recorded 3.95 million passengers, which is 0.4 per cent fewer than in the first two months of 2019. 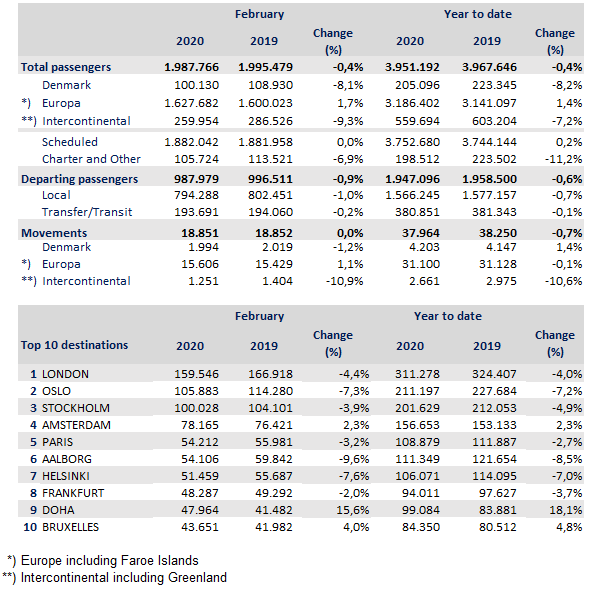