“The good news is that passenger numbers are going up. The bad news is that it’s only happening very slowly. In the usually busy month of July, we’ve had an average of only 18,000 passengers per day this year. Last year, we had 100,000,” says Chief Commercial Officer Peter Krogsgaard of Copenhagen Airport.

From June to July, the number of passengers grew from 151,085 to 565,910, in itself a remarkable increase, but still almost 82 per cent fewer than during the same period last year when 3.1 million people passed through the airport.

International aviation organisations, such as the Airports Council International (ACI), estimate that it may be 2022 or 2024 before traffic recovers to the level of 2019.  As a result, Copenhagen Airport is preparing to operate at reduced activity for a prolonged period of time. A vaccine could change that scenario and other factors could also play a part, so there is a lot of uncertainty right now.

“Predicting the future has become near on impossible. All parameters are currently so uncertain that it makes little sense to be working with forecasts, so we’re using broad-range scenarios. Our best bet right now is that we will end the year at 30–35 per cent of the traffic we had last year,” says Krogsgaard.

CPH announcing redundancies
In the half-year interim report released last week, CPH guided for a DKK 450–750 million loss for 2020 even with operational cost cuts and projects being postponed totalling about DKK 1 billion. Copenhagen Airport is therefore engaging with the trade unions on how to implement the contemplated cut of 650 full-time positions from its current total of 2,500.

“It is incredibly sad, but unfortunately we’ve no choice. We’ve really done everything we could to avoid having to let our highly skilled employees go, but there is simply too little traffic and not enough activity to keep our current staff occupied,” says Krogsgaard.

New travel patterns: Norway tops the list
“Unsurprisingly, the COVID-19 pandemic and the many travel restrictions imposed all over the world have also changed travel patterns. The UK is usually the most popular destination, but this July passenger numbers dropped by 90 per cent from 265,431 to 25,282. This puts the UK in seventh place. The new top destination country is Norway; it has suffered the smallest drop in traffic, at 72 per cent – from 237,261 passengers last year to 67,015 this year.

The reason that Denmark ranks so high on the list is that domestic travel has not been hit as hard as international travel. Traffic dropped by 81.3 per cent on European routes in July and by even more – 94.4 per cent – on long-haul intercontinental routes to Asia and the USA, whereas the number of passengers on domestic flights was down by 41.4 per cent. This trend is reflected in the current top 10 of individual destinations, as Aalborg is now in second place, only beaten to the first spot by Oslo.

Including the two ordinary months this year – January and February – a total of 5,587,225 passengers have so far passed through Copenhagen Airport in 2020. This represents a drop of 68.2 per cent. 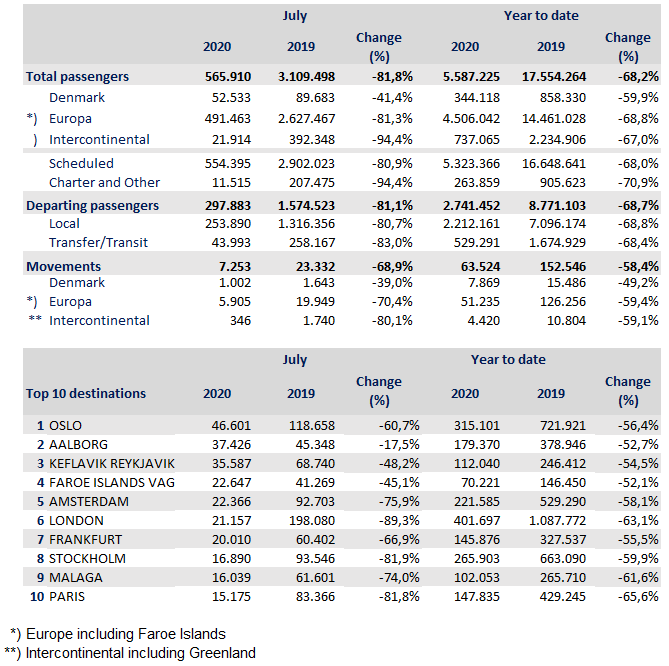