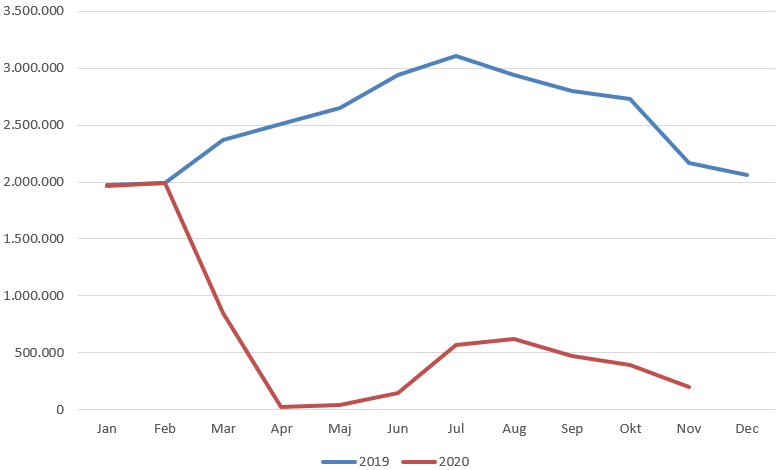 The terminals of Copenhagen Airport were nearly empty and quiet in November. Compared to the same month last year, passenger numbers dropped by 90.9 per cent from 2,164,175 to a mere 196,252. The aircraft flying also had lots of empty seats with less than one in three filled.

November is usually a relatively quiet month for travel. Last year, CPH had 680 daily arrivals and departures, but the number this November was only 165.

“The few people who do travel are either families going on necessary and essential trips or business travellers who need to call on important clients,” explains Chief Commercial Officer Peter Krogsgaard of Copenhagen Airports A/S.

Take-away food will is still available at the airport, and travellers can choose to eat at the gate, on board the plane or in one of the public seating areas. However, premises serving food and drink that have not already closed will block all seating in compliance with the new corona restrictions introduced yesterday for the Copenhagen capital region.

Rules eased for business travellers
On Monday, the Danish government eased the rules applying to business travellers. This means that all business travel is now considered essential, that travellers can take the rapid antigen COVID-19 test at Copenhagen Airport and avoid having to quarantine, and that companies can call a special hotline for updates on the different and changing coronavirus rules in force around the world.

“This is a small step in the right direction for the aviation industry and it’s good news for Danish exporters that it’ll now be easier for their service mechanics and fitters, sales staff and other business travellers to go on business trips to serve customers and get back home safely,” says Krogsgaard.

He also notes that the Danish Foreign Ministry will be working for international acceptance of the Danish COVID-19 certificate, so it can be recognised as official documentation that a person has tested negative before departing from Denmark.

“Finding a light in the corona darkness can be difficult, but the news that COVID-19 vaccines have now started to be administered raises hopes that things will slowly improve during 2021 allowing the aviation industry to recover some of the lost activity,” says Krogsgaard.

“Copenhagen is an international airport with lots of connections to Europe and the rest of the world. However, Denmark is a small country and domestic air traffic has always played a relatively limited role. Having said that, as connections to the world have gradually closed, domestic traffic has grown from 5 to 20 per cent of the overall traffic,” explains Krogsgaard.

While passengers travelling to Europe and on the long-haul routes have dropped by 92.3 and 91.4 per cent respectively, numbers on the domestic routes from CPH have dropped by 72.3 per cent.

In addition, domestic routes have made it to the list of Copenhagen’s top 10 destinations, with Aalborg topping the list in November ahead of Amsterdam, Istanbul and Stockholm. In fifth place, we find Rønne on the Baltic island of Bornholm ahead of otherwise major destinations such as Paris, Frankfurt and London. 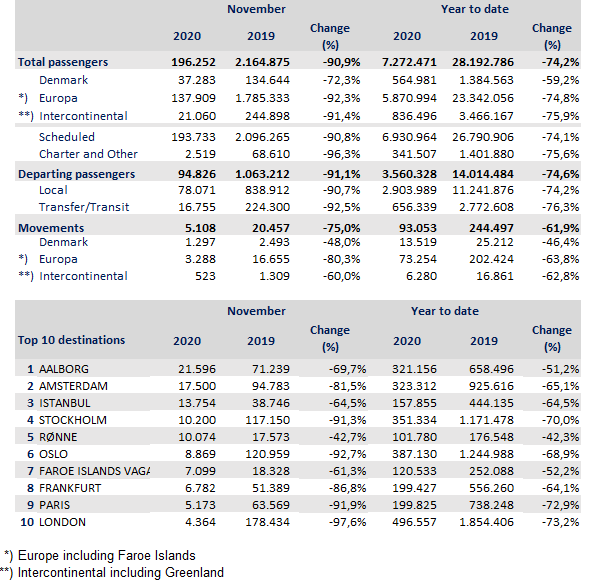