It is obligatory to wear a face mask in Copenhagen Airport as well as onboard the plane. When travelling to Denmark, different requirements apply depending on your country of residence and departure, as well as whether you have been vaccinated / previously infected. Travelling to Denmark as a tourist (coronasmitte.dk) 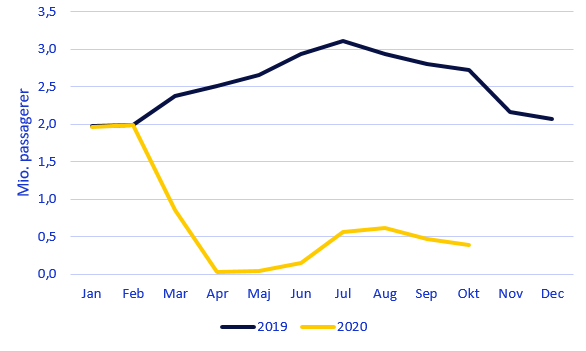 Following the first green shoots of optimism during the summer, COVID-19 has now intensified its stranglehold on our lives and the world is once again in lockdown. This has sent the aviation industry into freefall. In October, passenger numbers dwindled to a mere 14.5 per cent.

Last year, Copenhagen Airport had some 800 arrivals and departures on a fairly standard day. That number is now around 200. On a normal day, airlines filled some 70 to 75 per cent of their seats. Today, it is more like 30 per cent.

“COVID-19 infection rates are going up in Denmark and the rest of the world, and travel restrictions have been tightened further. With no immediate improvements in sight, the coronavirus crisis has sent the aviation industry deep into the red. This goes for both airports and airlines. At Copenhagen Airport, we borrow double-digit millions of Danish kroner every month to stay open and accommodate the very little passenger traffic that is left and to serve essential cargo traffic,” says Chief Commercial Officer Peter Krogsgaard of Copenhagen Airports A/S.

Crisis gone global
The sources of income are gone, but the expenses of keeping the airports open have not. In pre-corona times, CPH was a financially very good business, so with backing of the ownership (The pension companies ATP and OTPP and the Danish government) a sound agreement with the banks have been made to further strengthen the airport’s liquidity. But the crisis is deep and wide.

According to ACI, the international airport industry organisation, as many as 200 European airports are at risk of being forced into administration by Christmas. The International Air Transport Association (IATA) estimates that the airline industry globally will lose 84 billion USD in 2020.

“This is an extremely serious crisis for the entire industry. At Copenhagen Airport, more than 6,000 people employed by the 700-plus businesses operating in and around the airport have lost their jobs. This week, the UK has tightened travel restrictions and closed all flights to and from Denmark and Norwegian has had to close down in Denmark and the rest of Europe and send another 1,600 employees home,” says Peter Krogsgaard.

"The one thing that can turn the situation around in the longer term is a vaccine. For the intermediate term, we will need a common European COVID health pass. That would allow people to travel safely without the risk of spreading or contracting the disease. That way, we could open the world a bit and restore mobility,” suggests Krogsgaard.

Visiting family or travelling for business
Since the crisis struck and the number of passengers tumbled by more than 85 per cent, CPH has been unable to conduct its usual extensive surveys of passenger conduct and satisfaction.

However, a number of random tests show that business travellers still make up just over one third of passengers. And yet, the rest are not holiday travellers like they would have been before the crisis. The vast majority of people who are not travelling for business are Danes or other nationalities travelling to visit family.

“For the very few who are travelling, the journey through the airport must be as safe and pleasant an experience as possible. Our travellers generally indicate that they’re very satisfied with our corona safety measures, but they also express their sadness that there are so few passengers and so quiet in the terminals,” says Krogsgaard. 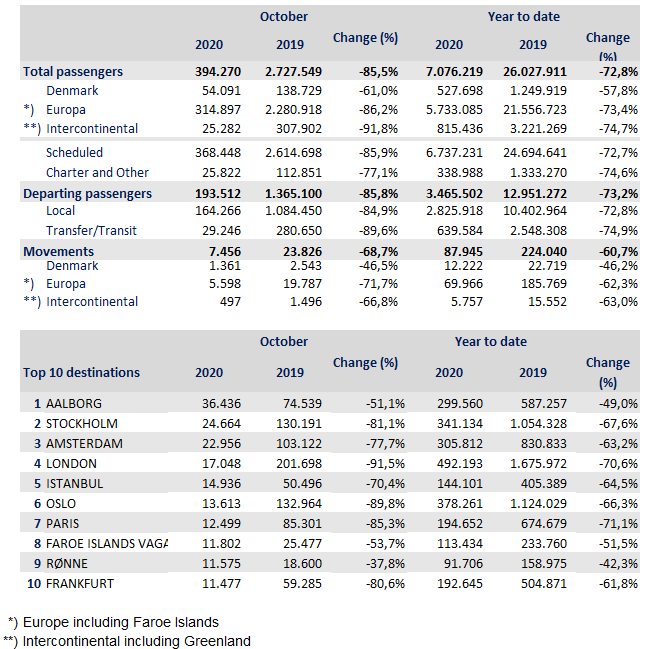