This August, 2.9 million travellers passed through Copenhagen Airport. This was 142,991 more than in the same month last year, representing an increase of 5.2%. There were both more domestic passengers and more passengers travelling within Europe, but the highest growth was recorded on the long-haul, intercontinental routes, where there were 15.9% more passengers this August than in the same month last year. Copenhagen Airport’s CEO, Thomas Woldbye, is delighted with the figures.

“During the past year, a number of new routes have opened,” says Thomas Woldbye, “and these routes in particular are having a real impact on passenger numbers now. The routes to Delhi, Hong Kong and Amman did not exist last year, but there is also growth on many of the old routes. By way of example, this August Air China’s service to Beijing resulted in almost 50% more passengers on this particular route. Later this year, another route to China will open, namely to Chengdu. This will not only give Danes the option to travel directly, but also make it easier for tourists to come here,” says Thomas Woldbye.

However, it is not just on the long-haul routes that passenger numbers are on the increase. European traffic grew by 3.9%, with 90,613 more passengers on the 20,290 flights between CPH and the European destinations in August. Turkey in particular, is on the way up again, following the decline of recent years.

“For a time, there has been a decrease in the number of travellers to Turkey, but the trend has been reversed this year. In particular, the classic tourist destinations are attracting more passengers, including Antalya, where there were 47% more passengers in August, and Gazipasa, which had 133% more,” says Thomas Woldbye.

Thomas Woldbye also notes that there is growth in the number of passengers transferring at CPH. In August, the figure rose by 4.5%.

London is still the most common destination, with 197,260 passengers in August, followed by Oslo and Stockholm. So far this year, more than 20.5 million people have passed through CPH, 3.6% more than in the same period last year. 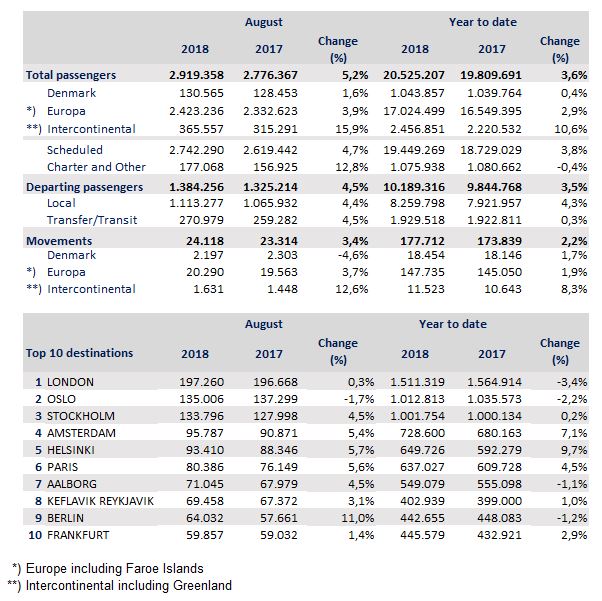