Por favor. The Danes have had plenty of opportunity to practise their Spanish language skills this summer. Spain has been the most popular destination over the high-summer period, with 310,000 passengers travelling there from Denmark or vice versa.

This is why destinations such as Palma and Malaga have crept up to numbers 7 and 8 respectively on the list of July's top 10 destinations.

"July has been the busiest summer month in the airport's history, with more than 3.1 million passengers, up 4.5% on the same month last year. So, it's fair to say the terminals have been very busy! In fact, we've had as many as 19 days with more than 100,000 passengers per day," says CEO Thomas Woldbye.

"Despite the airport being so busy, the atmosphere in the terminals has been extremely good, among both passengers and the many employees responsible for everything from baggage, check-in and service in the terminals to cleaning, security checks and flight handling," says Thomas Woldbye.

And, although the Danish Meteorological Institute has declared July Denmark's sunniest ever month, it seems the Danes' wanderlust is fully intact, and growing.

Scratching the surface a little, the airport is starting to reap the benefits of the many new intercontinental routes, for example to Hong Kong, Delhi and Amman. Added to this is the growth on existing routes.

"More long-haul direct routes out of Europe make heading out into the world via Copenhagen Airport a more interesting prospect for passengers in northern Europe. We've seen a 21% increase in the number of passengers transferring to long-haul routes, with destinations such as the US, India and China particularly popular," says Thomas Woldbye.

July also saw the airlines able to offer the highest number of direct flights in the airport's history: 190 - ten more than in July 2017.

The only decline in the year-on-year figures has been the number of charter flights to sunny destinations, which were down 9.2%. In contrast, scheduled services recorded growth of 5.7% - with Spain topping the list.

"It's quite striking to see the USA in the top 10 for July. Many people are choosing to travel long haul for their summer holiday on one of the ten direct routes from Copenhagen Airport to North America. It's also worth noting that Turkey is back on the list," says Thomas Woldbye.

The total number of operations - i.e. take-offs and landings - is only up 2.7%, while the number of passengers has grown by 4.5%. This is mainly because aircraft have become bigger, carrying more passengers.

A total of 17.6 million passengers have travelled through Copenhagen Airport so far this year, equivalent to a 3.4% increase on the same period in 2017. 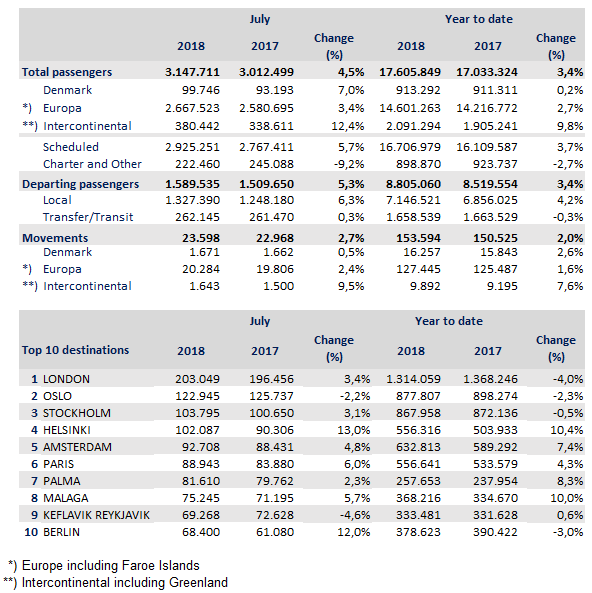