With 2,382,176 passengers passing through the terminals, March 2018 was the busiest in Copenhagen Airport's 92-year history.

"After a few flat months, high passenger traffic over the Easter holiday period at the end of what had been a cold and snowy March got things back on track. With 103,000 more people passing through the airport in March, passenger numbers were up 4.5%, which is good news," says CEO Thomas Woldbye.

A total of 6,267,580 passengers travelled through Copenhagen Airport in the first three months of the year, equivalent to a 0.4% increase on the same period in 2017.

309,000 flew long haul
Easter is traditionally the start of the short breaks season - typically to southern Spain and cities in Europe. But this year, many people have also taken advantage of remaining holiday entitlement to make longer trips. This is clear from the traffic figures, which show a 20% increase in passengers flying long haul to 309,000.

"The long Easter holidays typically see people flying to traditional destinations such as Phuket and Bangkok in Asia and New York and California in North America. But this year there has also been quite significant growth in demand for flights to places such as India, Cape Verde and Egypt, which is regaining ground as a tourist destination," says Thomas Woldbye.

Looking into the figures in more detail, not only are there 12% more seats on sale on the intercontinental routes, but the airlines are also flying with fewer empty seats. In March, the proportion of seats sold - the load factor - was up 7%.

"We anticipate that the many new travel options will sustain the growth in passenger numbers - both for Danish leisure and business travellers and the growing number of foreign visitors coming to Denmark via Copenhagen Airport," says Thomas Woldbye.

Most of the summer-only routes are old friends, but there are ten completely new routes, including Bastia on Corsica, the Italian city of Genoa, the Spanish city of Seville and Toulon-Hyères in the south of France, for St Tropez. 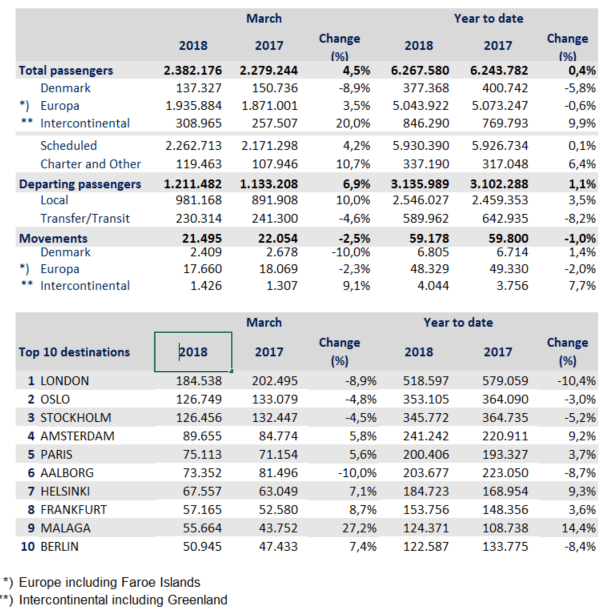