On an average day in 2017, 79,939 passengers passed through Copenhagen Airport to fly on one of the 160+ routes that now connect the Nordic region’s largest airport with the rest of the world.

Overall, more than 29.2 million passengers flew to and from Copenhagen, representing a 0.5% increase on 2016.

“In 2016, we had particularly high growth of almost 10%, so it was to be expected that 2017 would be more subdued,” says Copenhagen Airport’s CEO, Thomas Woldbye.

In recent years, the airport has focused in particular on attracting new long-haul routes, and in 2017 new direct routes to New Delhi and Agadir were among those to open.

“In recent years, we’ve more than doubled the number of intercontinental routes in order to connect Denmark even better with the world outside Europe,” says Thomas Woldbye. “And that work is continuing, which means that in 2018 we can look forward to a new route with Cathay Pacific to Hong Kong, a new route with Royal Jordanian to Amman and a significant increase in traffic to Beijing when Air China opens the route to Copenhagen.”

In 2017, the number of passengers on long-haul routes grew by 6%, with 3,252,581 passengers flying on one of the 36 intercontinental routes that connected Denmark with destinations outside Europe. During the year, 18 new destinations were added to the route map.

In 2017, the number of international tourists coming to Denmark via Copenhagen Airport increased by around 23%. In particular, it was the very young and the older generations visiting Copenhagen – often on weekend breaks.

“The number of international tourists flying to Denmark via CPH rose last year and passed 3.5 million, around 23% up on the previous year,” says Thomas Woldbye. “A large proportion of the new passengers are young people aged 15 to 24, while the older groups over 60 are also travelling to Denmark more often.”

British travellers still make up the largest group of tourists, while American tourists are now the second-largest group.

“This is due in no small part to the fact that in recent years we’ve acquired more direct routes from the USA to CPH, making it easier for American tourists to come to Denmark,” says Thomas Woldbye. “In 2017, there were 10 direct routes from CPH to the USA. This is benefiting the entire Danish tourism industry.”

Strengthening CPH as a hub

At the end of 2017, Copenhagen Airports A/S decided to reduce the charges that airlines pay to use the airport’s facilities by an average of 10%.

At the same time, a special incentive scheme was introduced that will mean a 35% reduction in charges for the special feeder traffic, i.e. short routes that fly passengers to Copenhagen so that they can transfer and fly out into the world. The reduced charges will take effect on 1 April this year.

“We want to strengthen Copenhagen Airport’s position as a hub for air traffic in Northern Europe. So we’ve decided to introduce the special incentive scheme, which will make it even more attractive for airlines to fly passengers via CPH,” says Thomas Woldbye, who stresses that the lower charges should ideally attract additional traffic and routes, thus enhancing Denmark’s connectivity.

“It’s also part of our contribution to achieving the objectives of the National Aviation Strategy presented by the Government last year,” says Thomas Woldbye.

In this regard, Thomas Woldbye also points to the domestic flying campaign that CPH initiated in collaboration with domestic airlines and the other Danish airports in 2017.

In the past decade, Copenhagen Airports A/S has invested more than DKK 9.5 billion on expanding and developing the airport. In 2017, the investment level was increased significantly, with the airport spending around DKK 1.5 billion over the year on expansions and improvements.

“We decided to increase our investments in 2017, and among other things this allowed us to complete the major expansion of the central security checkpoint and begin work on the first two phases of the new 36,000 m2 Pier E, which will have 13 new gates and additional stands for long-haul aircraft in particular,” says Thomas Woldbye. “We’re also under way with a significant expansion of the passenger area between Pier A and Pier B airside, an expansion of the busy Terminal 3 and the construction of a new walkway from the metro station directly to security. The numerous building activities are an important part of our ambitious expansion plan, Expanding CPH, which will create an airport with capacity for 40 million passengers.”

In 2018, the level of investment will again be increased:

“We’ve decided to raise the investment level even further in 2018 and expect our total investments to top DKK 2 billion. Important elements in this will be the construction of Pier E and completing the expansion of Terminal 2,” says Thomas Woldbye.

Positive results and a positive outlook

The expected moderate passenger growth lays the foundation for revenue growth and satisfactory profits. Revenue in the aeronautical segment grew by 2.6%, while in the non-aeronautical segment it fell by 2.7%. The Group’s total revenue increased to DKK 4,439.4 million, up 0.4%. Excluding one-off items, profit before tax was DKK 1,661.8 million.

CPH’s expected traffic programme for 2018 includes more new routes and increased capacity. Based on this, an increase in the total number of passengers is expected in 2018, though it may be subject to general economic developments, decisions by airlines relating to routes and capacity, and isolated events in the aviation industry. 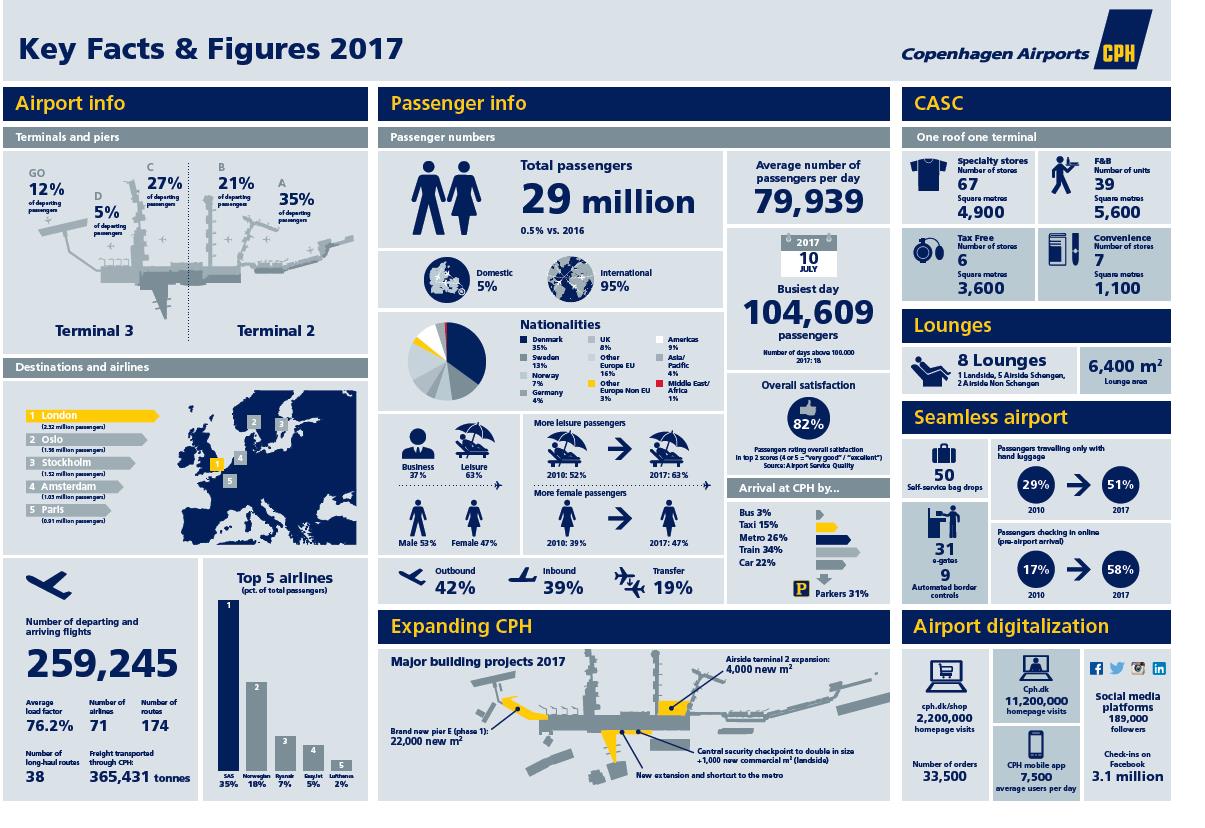