Attention: Swedish citizens/travelers from Sweden: Swedish citizens must have a valid travel purpose to travel to or via CPH Airport. Please find specific information concerning travel restrictions and travels with a worthy purpose here.

The 2,723,353 travellers passing through the terminals in Copenhagen Airport made October a very busy month. The number of travellers was up 4.2% compared to the same month last year.

The number of passengers was highest on the most popular autumn holiday travel day: Friday 12 October. Never before in the history of the airport have so many departing passengers passed through check-in and security on a single day.

A total of 60,644 people departed from Copenhagen and travelled out into the world. If one includes the number of passengers arriving, the total on the day was 107,136.

That meant that on the day, the average waiting time in security was 2 minutes and 29 seconds. Given that the busiest period was in the morning, the maximum waiting time was 10 minutes and 14 seconds.

“The short waiting time in security on such a busy day indicates how well passengers and staff cooperated, and that most passengers had packed their hand luggage properly, making it easier and faster for our staff to check,” says Thomas Woldbye.

The traffic figures for October reflect the most significant trend of the year: more people flying long haul out of Europe. In October, the traffic increased by 11.6%. Year to date, the number of travellers on long-haul routes has increased by 11%.

This growth seems to be continuing. The airlines’ winter traffic programme came into force on 28 October. It includes four new long-haul routes: SAS to Hong Kong five times a week and Norwegian to Aqaba in Jordan and Krabi in Thailand once and twice a week, respectively. Meanwhile, from 10 December, Sichuan Airlines will be flying to Chengdu, the panda capital of China.

If one looks at the first ten months of the year and compares them to the same period last year, the number of passengers increased by 3.8% to 26,040,521.

In the Top 10 list of destinations, London comfortably retains its position as number 1. The greatest growth in October was on the route to Berlin with 12.3% more passengers than in the same month last year. 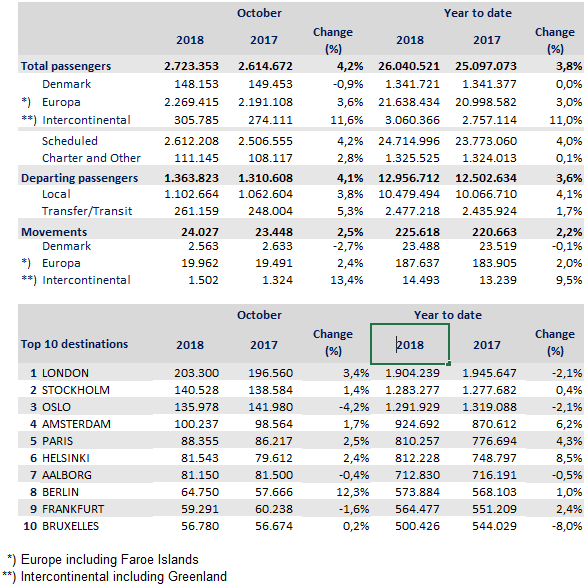