Spain and Greece were the favourite destinations for the 2017 autumn holiday season, and more passengers took direct flights.

During the busy travel days of the holiday, a total of 778,312 passengers took direct flights to their destinations, an increase of 2%. The number of transfer passengers fell by 13% to 191.783.

“The numbers for this year's autumn holiday travel reflect a trend we’ve seen all through 2017: more passengers flying out of Copenhagen are taking direct flights to their destinations, while the number of transfer passengers is falling,” said Copenhagen Airport CEO Thomas Woldbye.

This brings the total passenger count at Copenhagen Airport in October to 2,614,672, or 2% fewer than last year’s busy tenth month.

“The winter season has new routes to the sun, to the snow and to culture: the beaches of Tenerife, Fuerteventura or Agadir; the skiing destination of Tromsø in Norway or Östersund in Sweden; or perhaps Kiev or New Delhi for a cultural experience. And starting in May of next year, we’ll have direct service from Copenhagen to Hong Kong, so there’s a lot to look forward to,” said Mr Woldbye.

In fact, the sunny city is this year’s fastest growing top-ten destination out of Copenhagen, with a 13.2% rise in passenger numbers. During the first ten months of 2017, a total of 499,063 passengers flew from CPH to Màlaga. 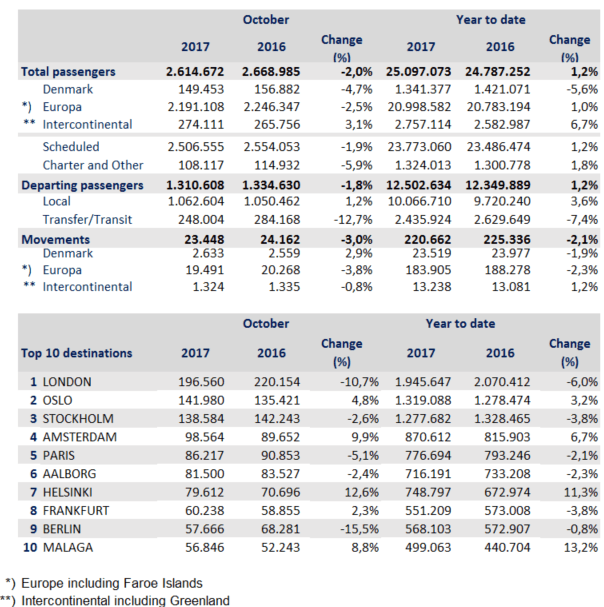