Let’s rewind to February 2020 when the terminals of Copenhagen Airport (CPH) were teeming with life and happy travellers, and the coronavirus was just a somewhat disconcerting rumour from China. That month, 1,987,766 people passed through the airport. This year, the figure was 106,139 – equivalent to a drop of 95 per cent.

One year ago tomorrow, the Danish government announced a lockdown at its historic press conference on 11 March. A few days later, Denmark closed its borders. The global COVID-19 pandemic triggered the worst crisis for Copenhagen Airport since World War II.  Even with two ordinary months of traffic in 2020, passenger numbers for the year fell from 30.3 million to 7.5 million. In 2021, the numbers of both flights and passengers have continued to fall.

“The entire world is in effect closed down, and travel is currently only permitted for absolutely essential family or business reasons. A year ago, we had about 675 flights per day in February, while this year, we had some 100 departures and arrivals – and two thirds of the seats on those aircraft were empty,” explains Chief Commercial Officer Peter Krogsgaard of Copenhagen Airports A/S.

International traffic was virtually non-existent in February. As a result, the two largest destinations out of CPH were both domestic: Aalborg and Rønne. So far, the Danish aviation industry alone has lost as many as 10,000 jobs, most of them at Copenhagen Airport.

“The aviation industry was the first to be hit by the crisis, and we’ll probably be the last to emerge from it,” says Krogsgaard.

A ray of light in the corona darkness
However, the roll-outs of vaccine programmes all over Europe, the efforts to develop a Danish and an international ‘coronavirus passport’ and the airlines’ spring and summer programmes have all helped to light a candle in the coronavirus darkness.

“If you look at the airlines’ websites, you’ll find plenty of spring and summer travel destinations to choose from, whether you want a city break or to go to a beach in Spain, Greece, Italy, Croatia or France. Of course, it’ll all depend on whether it’ll be safe from a health perspective and if travel restrictions are eased in Denmark and the rest of the world. But people definitely have the appetite for travel,” says Krogsgaard.

During spring and summer, SAS and Norwegian will be adding routes to typical holiday destinations, such as Crete, Athens, Kos, Rhodes, Rome, Florence, Sicily, Pisa, Milan, Malta, Alanya, Nice, Montpellier and Dubrovnik. EasyJet will mainly be focusing on major European cities, such as Berlin, Paris and London, while Ryanair will also provide services to Porto, Naples and Thessaloniki, among others.

SAS already has intercontinental flights to Washington, Chicago, San Francisco, New York and to Shanghai in China – although currently, these are mainly cargo routes.

“It’s impossible to say how many of these routes will open this summer, so people should remember to check their airline’s rules for re-booking, for example. On the other hand, the many routes being planned shows that the airlines have plenty of aircraft just waiting to carry passengers as soon as they get permission and can do it safely,” says Krogsgaard.

“We don’t expect demand for air travel to take off until steps are taken to reopen society in Denmark and internationally. We’re certainly looking forward to seeing Danes travel the world again, but we’re just as excited about welcoming some of the several millions of tourists who usually visit Denmark during the summer months,” he says. 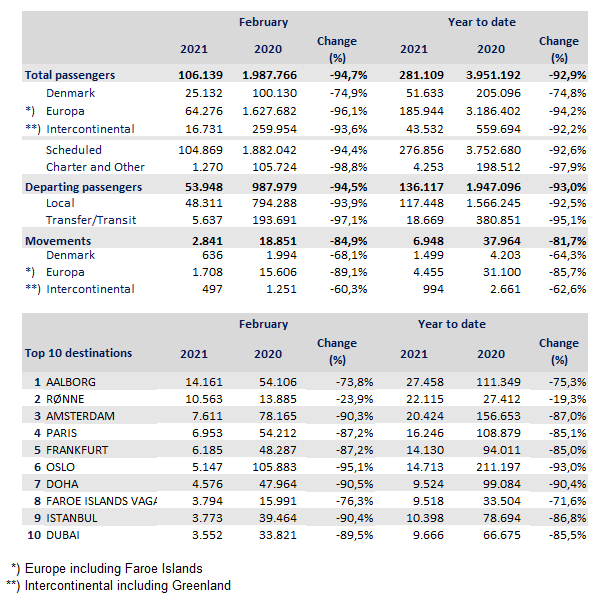