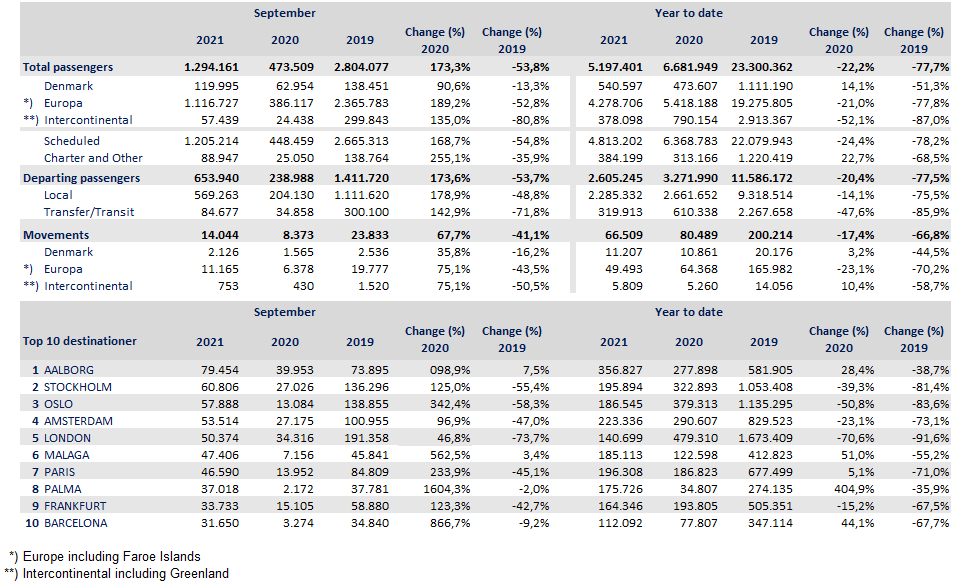 The simpler the travel rules, the more people choose to travel. This is the clear indication from the traffic data collected at CPH over the last few months. Since the requirements to take COVID tests and to isolate were scrapped on 26 June for travel within the EU and the wider Schengen Area, the numbers of passengers have grown from half a million to 1.3 million in September.

“It seems as if a huge pent-up appetite for travel was unleashed when it became easier and more manageable to travel,” says Peter Krogsgaard, Chief Commercial Officer of Copenhagen Airport.

After the restrictions were lifted, passenger numbers more than doubled during the first month alone. More and more European destinations have since turned green in the travel guidelines, and passenger numbers have grown steadily, reaching 1,294,161 travellers in September. This corresponds to 46.2 per cent of the activity in September 2019, the most recent normal year before COVID caused havoc in all our lives.

International visitors are yet to return
Currently, the majority of passengers live in Denmark or southern Sweden, while other nationalities are still few and far between at the CPH terminals.

“Before the pandemic, some six million foreign tourists and businesspeople passed through the terminals every year. This part of the recovery has not really begun, and the impact on hotels, culture, conferences, restaurants and other branches of the experience economy is devastating,” explains Krogsgaard.

Many stakeholders argue that foreign tourism needs a shot of adrenaline:

“Globally, we need even simpler rules, so everybody can travel. At the same time, Denmark should be marketed proactively as an exciting anSd, not least, healthy and safe destination,” says Krogsgaard.

A busy autumn break beckons
There is no doubt that holidaymakers in Denmark and southern Sweden favour Spain as their destination of choice, followed by Greece and Italy. No less than 12.5 per cent of all flights went to Spain in September, and three Spanish cities feature on the top-ten of destinations: Málaga, Palma and Barcelona.

Also in the run-up to the traditional autumn break, many boarding passes will indicate southern European destinations, as the busiest day of the year so far, 15 October, beckons when around 70,000 passengers are scheduled to travel.

“We’re looking forward to busy days with a great atmosphere in the terminals and passengers may find that our checking-in procedures still take a little longer. That’s why we’ll have extra staff on duty, so everyone gets a great start to their autumn break and will be reminded of the international rules, for instance the requirement to practise social distancing and to wear face masks. This remains mandatory at airports and on flights all over Europe,” explains Krogsgaard.