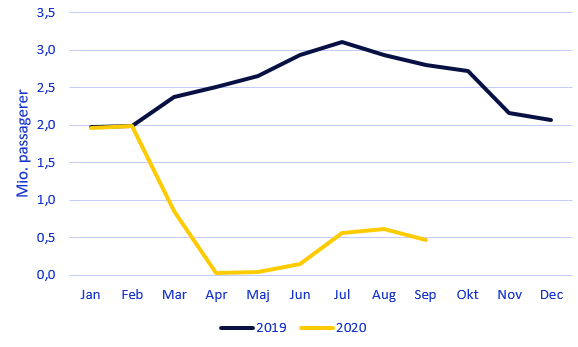 Passenger numbers continued to decline in September as travel advisories were repeatedly tightened and more countries were moved from the yellow to the orange list: countries to which the Danish authorities advise against all non-essential travel.

Since the coronavirus crisis was declared on 11 March and the world moved into lockdown, CPH has lost 16,4 million Danish and international travellers.

"International aviation is in a crisis of historic proportions. While we thought things couldn't get any worse, the situation has in fact deteriorated even further since the start of the autumn season, and the opportunities to travel are being reduced ever more," says Chief Commercial Officer Peter Krogsgaard of Copenhagen Airport.

The spread of COVID-19 continues and the global community is going into lockdown, so the authorities advise against travelling virtually anywhere apart from to five or six European countries. This has sent Copenhagen Airport, the airlines and all businesses operating in and around the airport into freefall. Every time a new travel advisory is released, the numbers of air travellers to the relevant destinations are cut by half very quickly. This is eroding the entire foundation for air traffic," explains Krogsgaard.

For example, when the Danish Foreign Ministry placed France in the orange category in the last week of August, the number of travellers to the country dropped from 7,000 to 4,000 per week, and this trend continues.

Only 40 per cent of seats being sold
"The crisis in aviation is more serious than ever. The restrictions on travel is impacting thousands of Danish jobs and could eventually undermine Denmark's chances of regaining its position as the key aviation hub for passenger traffic in northern Europe and for freight worldwide, but we'll do everything in our power to prevent that from happening," says Krogsgaard.

Overall, passenger numbers fell from 621,215 in August to 473,509 in September, meaning a drop to a mere 16.9 per cent of last year's September traffic. The decline appears to continue in all areas. For example, the load factor, i.e. the number of seats sold on flights, has dropped from 60 per cent in July to less than 40 at the end of September.

"The autumn school break has just started. Traditionally, this is a very busy week with about 100,000 travellers daily. This year, we're expecting 10,000 to 15,000 passengers a day," says Krogsgaard.

CPH: EU-wide rapid COVID-19 test of travellers
Krogsgaard believes the greatest challenge is the uncertainty prevailing about rules and guidelines in Europe.

"It's difficult to know which rules apply in the respective countries. Obviously, the ultimate solution is a vaccine that can eliminate COVID-19, but until it's found and ready to be made available, a common European before-you-fly-test with rapid results would be a good solution. It would allow Danes to travel to Europe, and Europeans to travel to Denmark without increasing the risk of infection," says Krogsgaard.

He points out that the technology is developing rapidly and that already today, a so-called antigen COVID-19 test can produce results within 15 minutes.

"The ambition must be to roll out a recognised rapid test in Europe, and only allow people to board a plane if they have a fresh negative test. That would enable businesspeople, holidaymakers and students to travel freely. It would be a way of regaining a great deal of freedom and stopping the freefall of Danish aviation and mobility in Europe," concludes Krogsgaard. 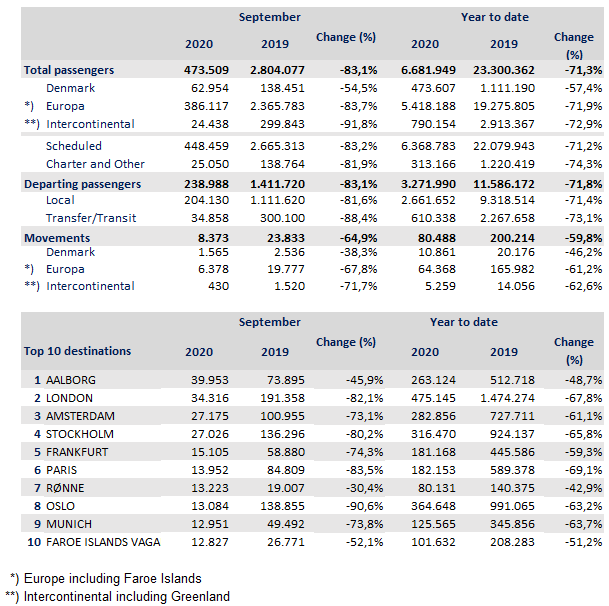