Tightened border control Denmark further reopens borders and eases travel advice for countries in the EU and Schengen area, as well as the UK. Objective criteria have been introduced which will determine the countries for which the borders will be opened. The borders will be open to citizens of countries that meet the criteria. Travelling out of CPH? Please contact your airline for further information. Keep updated here

With a total of 2,651,938 passengers, the terminals of Copenhagen Airport were teeming in May, though not quite to the extent of last year. Passenger numbers fell by 3.6 per cent.

“The SAS pilot strike was one of the main reasons for the drop in traffic. We had about 90,000 fewer SAS passengers compared to May last year and that is obviously noticeable,” said Copenhagen Airport CEO Thomas Woldbye.

Norwegian also carried fewer passengers in and out of Copenhagen, losing about 7 per cent relative to May last year. The reason is that the carrier is in the process of aligning its traffic programme.

Moreover, along with airlines the world over, Norwegian has been affected by the grounding of all Boeing 737 MAX aircraft pending safety investigations. Norwegian has 18 planes of that model in its fleet.

With summer drawing near, last year’s bankruptcy of Primera Air also shows in the traffic data. The company flew lots of charter flights to many different summer destinations and CPH will miss out on that traffic this year. The same goes for Icelandic carrier WOW Air, which went bankrupt in March. These two carriers accounted for 43,000 passengers in May 2018; passengers that will not show in this year’s data.

Yet everything points to a very busy summer. Today, 14 June, will be the busiest day of the year so far with an expected 108,500 passengers.

“Our forecasts tell us that from today and until 31 August, we will have as many as 31 travel days with more than 100,000 passengers passing through Copenhagen Airport. There is a great deal of excitement but also a lot of hard work involved in making sure that everyone gets off to a good start to their summer holidays,” said Thomas Woldbye.

During the first five months of the year, the total number of passengers at Copenhagen Airport was 11,501,878. That is 12,606 fewer than in the same period last year and a slight decline of 0.1 per cent for 2019 to date.

Airlines continue to reduce their capacity on domestic routes. The number of departures and arrivals fell by 6.5 per cent, resulting in a drop in air traveller numbers, though only by 4.7 per cent to 141,816. 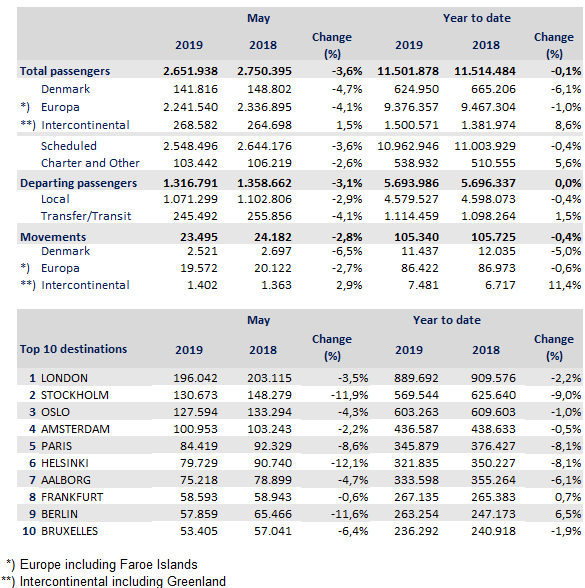