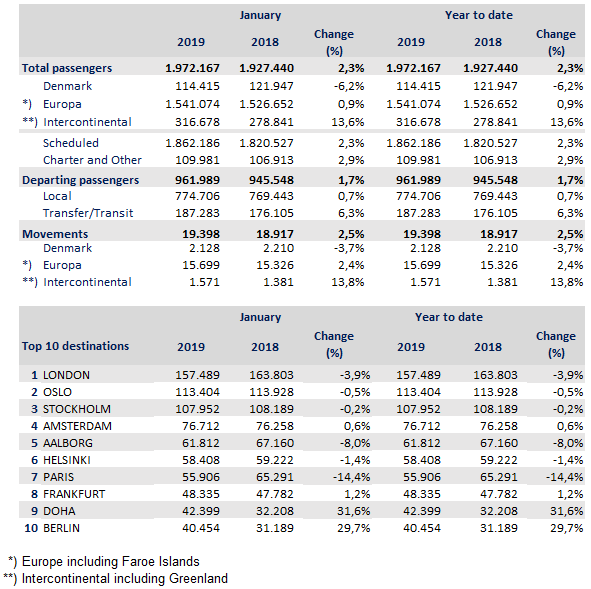 With 2.3% more travellers, the year is off to a solid start at Copenhagen Airport. A total of 1,972,167 travellers came through the terminals in the first month of the year.

"The growing demand for long-haul flights is a particular driver for the growth in traveller numbers. The number of passengers on one of Januarys 36 long haul routes increased by 13.6%," says Thomas Woldbye, CEO.

Doha appears on the Top 10 of most popular destinations for the first time. From here, Qatar Airways use their hub at Hammad International Airport to transfer travellers, particularly to Asia. More than 8 out of 10 people travelling to Doha transfer to destinations such as Bali and Thailand.

"Quite a large proportion of travel to Asia now goes via the big hubs in the Middle East. Since Qatar Airways went from 14 to a typical 18 weekly departures in late summer, the traffic to and from Doha has increased - compared to January last year a 32% growth with 42,000 travellers," says Thomas Woldbye.

Growth on the long-haul routes impacts the number of transfer passengers who fly into Copenhagen on the short routes, before flying on directly to the rest of the world. Transfer passenger growth was 6.3%.

"If we look behind the numbers, we can see that the transfer growth is particularly driven by the routes to China, India, and the USA - not least the SAS route to Hong Kong. To this should be added passengers flying into CPH and on to one of the big hubs in the Middle East," says Thomas Woldbye.

Domestic traffic fell by 6.2% in January, to 114,415 passengers. One of the reasons is that airlines offer 3.7% fewer departures.