Copenhagen Airport's 2018 travel trends continued in November with substantial increases on the short routes of 5.3% and a significant and impressive 10.7% growth on the long-haul routes out of Europe.

"The demand for travel to and from Denmark is on the up. Not just in November. During the first 11 months of the year, 28.2 million travellers passed through the terminals. That is 3.9% more than in the same period last year," says Thomas Woldbye, CEO.

SAS represents approx. 80% of the transfer traffic in Copenhagen, but this year airline companies such as Norwegian, Air Canada, Singapore Airlines and Air India have also contributed to the increase in transfer traffic.

"The long-haul routes out of Europe are crucial if Denmark is to retain its role as an important international traffic hub in Northern Europe. That is why we are focus on collaborating with airline companies to acquire more long-haul routes, so that Danes, Swedes, Norwegians, Poles, Germans and the people of the Baltic countries can fly to Copenhagen on short routes and then on to further-flung destinations, instead of flying via, say, Amsterdam or London," says Thomas Woldbye.

There is also traffic in the opposite direction. On the long-haul routes, the number of foreign tourists and business travellers is also on the rise. The Airport is expecting more than one million Americans to fly to CPH this year. They also expect a significant increase in the number of Chinese tourists this year, when the compound effect of the three, newly-opened routes to China makes itself felt, increasing the number of seats available by 88%.

In this context, Thomas Woldbye points out that the 2019 National Budget will allocate DKK 17 million over the next four years to the Global Connected route-development programme. The City of Copenhagen and Copenhagen Airport will also contribute several million.

"When airline companies are making up their minds about where to open a new route, it is often crucial for them to see support from the countries involved. With Denmark and Global Connected they can be certain of that support. The funds are used in cooperation with the companies to market Denmark as a destination, thereby attracting more tourists and business travellers. This means that new routes can become profitable more quickly," says Thomas Woldbye.

While international traffic increased, domestic traffic decreased by 4.6% compared with November of last year, A total of 1,483,401 passengers flew on domestic flights this year, a small drop of 0.4%.

In the Top 10 Destinations, London continues to be the most popular. So far this year, 2,095,191 have travelled on the routes to and from London. 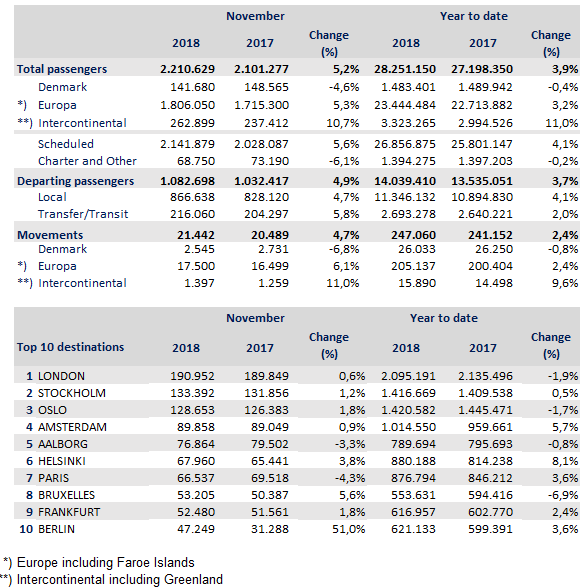