Travel rules for Denmark It is obligatory to wear a face mask in Copenhagen Airport as well as onboard the plane. When travelling to Denmark, different requirements apply depending on your country of residence and departure, as well as whether you have been vaccinated / previously infected. Travelling to Denmark as a tourist (coronasmitte.dk)

This year, 175,000 more passengers have chosen to travel on one of the 34 direct long-haul intercontinental routes currently operating out of Copenhagen Airport.

In 2017, new routes opened to New Delhi, with Air India, and to Agadir, with Air Arabia. At the same time, a number of airlines have increased their departures to Bangkok, Los Angeles and New York.

“And the growth looks set to continue,” says Copenhagen Airport’s CEO Thomas Woldbye. “We already know that in 2018 we’ll be opening new routes to Hong Kong, with Cathay Pacific. We have a new route to the Middle East in the pipeline. And we’re also working hard to get even more traffic to China and other destinations.”

Generally speaking, however, November was dominated by the bankruptcy of Air Berlin. Overall, the number of passengers fell by 75,079, equivalent to 3.4%, more than half of which was down to the collapse of the German airline, which resulted in a net loss of 39,000 passengers compared with November last year.

Besides Air Berlin’s bankruptcy, there has also been a notable fall in transfer traffic. In November, 37,410 fewer passengers transferred via CPH, corresponding to a fall of 15.5%. SAS accounts for 82% of the airport’s transfer traffic. 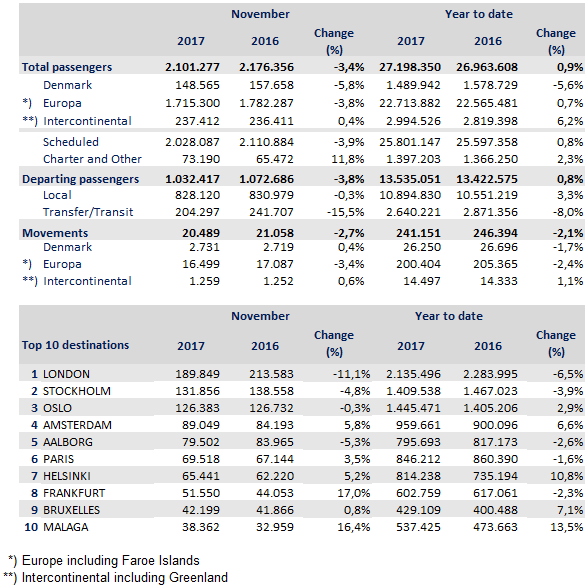