Travel restrictions for Denmark Special rules apply when entering Denmark from abroad. Passengers must present a negative Covid-19 test (either PCR test or antigen test) that is a maximum of 48 hours old before boarding the aircraft. Excluded are passengers from yellow countries in the EU / Schengen. Passengers from yellow and orange EU / Schengen countries, who have been vaccinated against COVID-19 are also exempt from the requirement for testing. This also applies to passengers who have previously been infected with Covid-19 and who can present a positive PCR test that is between 14 and 180 days old. Upon arrival at Copenhagen Airport, it is also mandatory to have a Covid-19 test performed. During busy periods this can cause extra waiting time. The test requirement does not apply to domestic flights. The restrictions change continuously, so you must stay updated to get the latest current restrictions at https://coronasmitte.dk/en

For the first time in exactly two years, Copenhagen Airport saw a decline in passenger numbers. A drop of approximately 85,000 passengers compared with April of last year was equivalent to a 3.9% decline.

All the big travel days before Easter were in March this year, and in April last year the rate of increase in passenger numbers was unusually high at 17%. We were not able to repeat that growth this year, and altogether this resulted in an expected, but hopefully short-lived, interruption in two years of continuous growth," said Thomas Woldbye, CEO of Copenhagen Airports A/S.

Year-to-date traffic was up by 0.1%, and a total of 7.5 million passengers travelled through Copenhagen Airport in the first four months of the year. 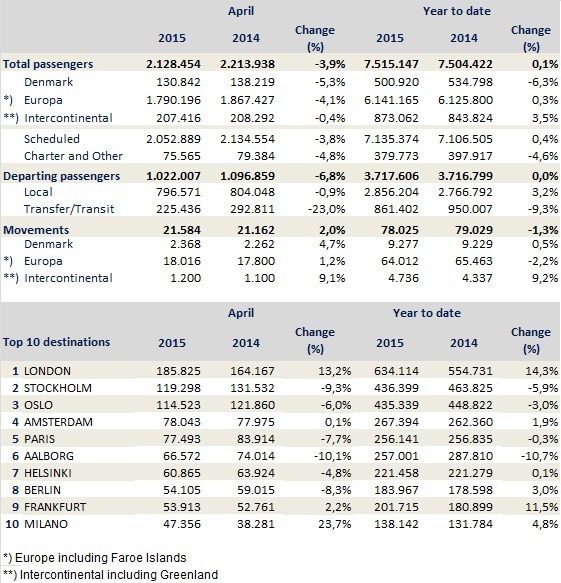