With another passenger record in August, we can look back on the busiest summer in the history of the airport with more than 7.5 million travellers. That was 500,000 more than last year. We also saw the number of transfer passengers increase during the summer period. This is interesting as people usually prefer direct flights for their summer holidays," said Thomas Woldbye, CEO of Copenhagen Airports.

The number of transfer passengers was up by 19.4%, and in particular more Scandinavians travelled through Copenhagen Airport en route to North American destinations such as New York, San Francisco and Fort Lauderdale and to major European cities such as London, Amsterdam, Paris and Milan. The number of locally departing international passengers rose by 7.3%, whilst domestic traffic grew by 3.0%. As usual, August was characterised by the end of the school holidays and people returning from vacation, the effect being that there were some 115,000 more arriving passengers than departing.

The total number of passengers at Copenhagen Airport for the year-to-date period is 17.4 million, which is almost 1.2 million more than in the same period of last year and represents a growth rate of 7.2%. 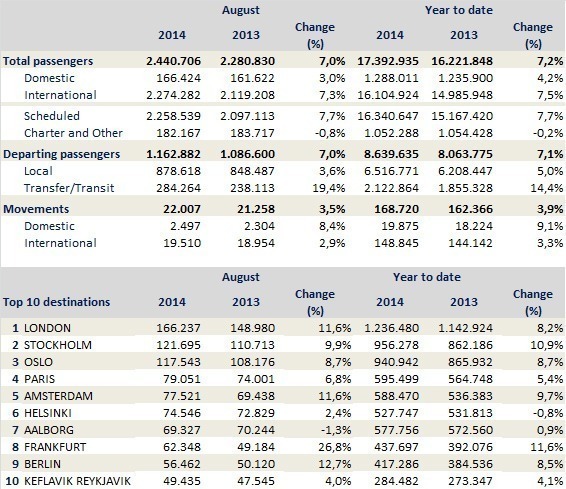