Travel restrictions for Denmark Special rules apply when entering Denmark from abroad. Passengers must present a negative Covid-19 test (either PCR test or antigen test) that is a maximum of 48 hours old before boarding the aircraft. Excluded are passengers from yellow countries. This also applies to passengers who have previously been infected with Covid-19 and who can present a positive PCR test that is between 14 and 240 days old. Passengers that have been vaccinated against Covid-19, and travel from from yellow and orange countries are also exempt from the requirement for testing. Upon arrival at Copenhagen Airport, it is also mandatory to have a Covid-19 test performed. The same exemptions as above apply. During busy periods this can cause extra waiting time. It is obligatory to wear a face mask in Copenhagen Airport as well as onboard the plane. From June 11, special travel restrictions apply to passengers from Great Britain. Before boarding the plane, passengers must present a negative PCR-test that is maximum 48 hours old. Upon arrival in Denmark, residents in Great Britain must show a negative PCR-test that is maximum 48 hours old. Exempted are passengers that are fully vaccinated againt Covid-19. The restrictions change continuously, so you must stay updated to get the latest current restrictions at https://coronasmitte.dk/en

Our traffic figures show that, apparently, people's desire to travel remained intact despite the fantastic summer weather in Denmark. This made July the busiest month ever in the almost 90 years' history of Copenhagen Airport," said Copenhagen Airport's CEO Thomas Woldbye.

The exact passenger number in July ended up at 2,596,230, almost 170,000 more than in July of last year. International traffic was up by 7.4%, domestic traffic by 1.1%, and charter traffic by 0.9%. Transfer traffic continued recent months' positive performance, increasing by an impressive 14.9%.

The increase shows that our focused collaboration with the airlines to strengthen the hub is successful," said Woldbye.

Overall, 14,952,229 passengers used Copenhagen Airport during the first seven months of the year, just over 1 million more than at the same time last year, equivalent to a growth rate of 7.3%. 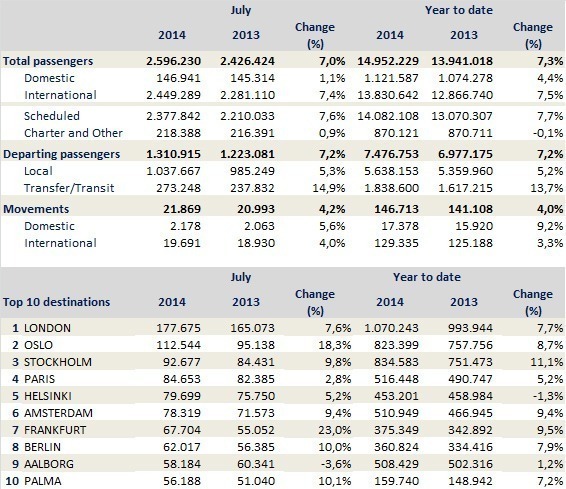