For many people, the summer holiday has expanded, extending into August. Following last year’s record summer, the final month of this summer, August, saw 26,963 more people fly in and out of Copenhagen Airport, representing a 1.0% increase on the same month last year.

“When new direct routes open to destinations outside Europe, traffic grows,” says Copenhagen Airport’s CEO Thomas Woldbye. “We can see that, for example, with Air Canada, which earlier in the year decided to deploy a Boeing 777-300ER on the route to Toronto. The new aircraft has 102 more seats, which meant that in August this year 33% more passengers flew between CPH and Canada than in the same month last year.”

So far this year, intercontinental traffic has increased by 7.3%, with passengers flying between Denmark and the USA a particular driver of growth:

“Around 750,000 people have travelled between Denmark and the USA this year, which is 7% more than in the same period last year. In recent years, we’ve opened a lot of new routes to the USA, which has meant more American tourists in particular flying here,” says Thomas Woldbye, who emphasises that the airport’s strategy for attracting new routes is helping to create growth in Denmark.

“Air India’s route between Delhi and Copenhagen will be opening on Saturday,” says Thomas Woldbye. “This is a milestone for us. We’ve been working extremely hard for more than eight years to get a route to India on the map, and our expectations are high. Currently, more than 30,000 people travel between CPH and Delhi via other airports, and in future they will find it much easier getting there when the Air India route opens.” Thomas Woldbye stresses that the Delhi route will add DKK 259 million to Denmark’s GDP.

In August, London was the most popular destination, with 196,668 travellers, while Helsinki experienced the biggest increase of all the major destinations. 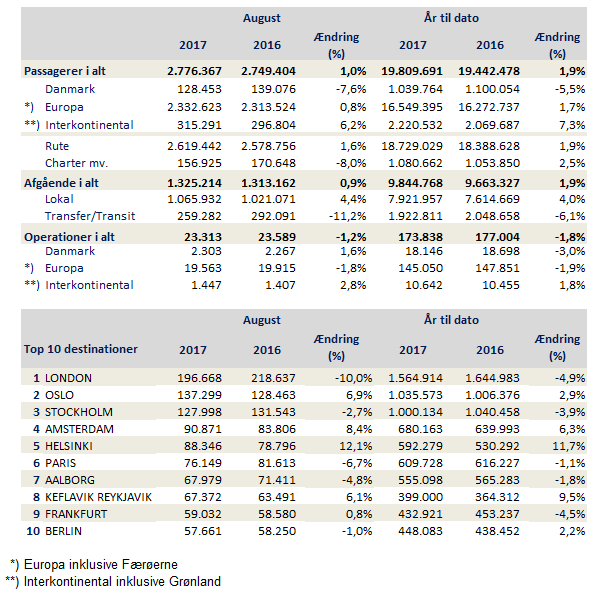