One of the reasons is a decline in domestic traffic this year. To date, the total number of domestic travellers has fallen by 5.7%, with a 7.3% fall in September alone.

“For many Danes, domestic flying has simply disappeared off the radar when it comes to travelling across the country,” says Copenhagen Airport’s CEO Thomas Woldbye.

“In the capital in particular, a lot of people are not aware of the possibilities of flying to Sønderborg, Bornholm, Midtjylland and the other regional airports. We need to reverse that trend to connect up Denmark better,” he said.

A Userneed survey commissioned by Copenhagen Airport shows that four out of ten Danes do not know that there are seven domestic airports in Denmark. Even fewer know that there are more than 600 departures every week to choose from if they want to get quickly to and from Jutland, Bornholm and the capital.

The survey also shows that 55% of Danes consider geographical distance the main reason for having less contact than they would like with close friends and family.

“The desire for more contact between friends and family across the country shows that there is still big potential for domestic flying,” says Thomas Woldbye. “Then there are Danish companies, which also want to have the best possible links to the capital – and out into the world through the just under 160 international flight routes from Copenhagen Airport.”

Aalborg number 6
In the top 10 destinations, Aalborg is number 6. In the first nine months of the year, 634,691 people flew between Aalborg and Copenhagen. Internationally, London is still the most popular destination, although traffic in September fell by 10.3% as a result of easyJet’s closure of the route to Luton.

So far this year, the total number of passengers at CPH has increased by 1.6%. Charter traffic grew in September by 2.5% – and this year the total growth is 2.5%.

The long-haul intercontinental routes out of Europe grew by 6% in September. So far this year, the growth has been 7.2%. 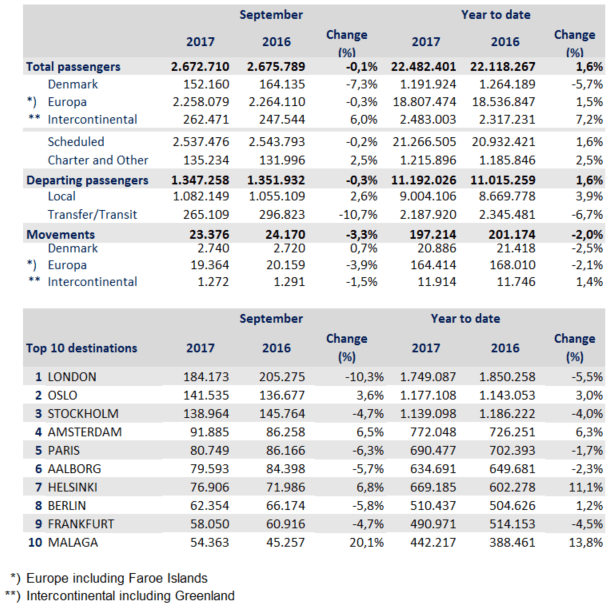