Winter is traditionally the least busy time of year at Copenhagen Airport, but that will change at the end of March when the airlines start their summer schedules.

Until October, travellers will have 52 more destinations to choose from compared with the winter season that is now coming to a close.

Most of the 52 destinations are summer routes only, but there are also year-round routes starting up during the spring and summer; to Amman and Kiev, for example.

Most of the 52 routes were also part of last summer's schedules, but there are 10 all new destinations, including Bastia (Corsica), Genova (Italy), Seville (Spain) and Toulon near St. Tropez in the south of France. Or, for the long-haul traveller, how about Hong Kong.

"There is an abundance of travel options in the spring and summer, and that is one of the reasons we expect to see passenger numbers increase. First, there are the many long weekends around Easter, Whitsun, Ascension Day and All Prayers Day. Then comes the busy summer period, which we also expect to bring more travellers," said Copenhagen Airport CEO Thomas Woldbye.

Copenhagen Airport had a total of 1,957,964 passengers in February, 1.3% fewer than in February of last year. The number of transfer passengers and domestic travellers fell by 6.6% and 2.3%, respectively, while intercontinental travellers on the long-haul routes were up by 6.6%.

A total of 3,885,404 passengers have passed through the CPH terminals during the first two months of the year.

Travel patterns have changed in recent years, and so have travellers at Copenhagen Airport. More of them now fly long-haul routes and direct to their destinations, while fewer passengers transfer at Copenhagen and fewer fly to domestic destinations.

"The composition of travellers at Copenhagen has changed considerably in recent years. We now have more leisure travellers than business travellers in our terminals," said Mr Woldbye.

Turning to charter traffic, this category grew by a total of 4.9% to 217,727 passengers in the first two months of the year. 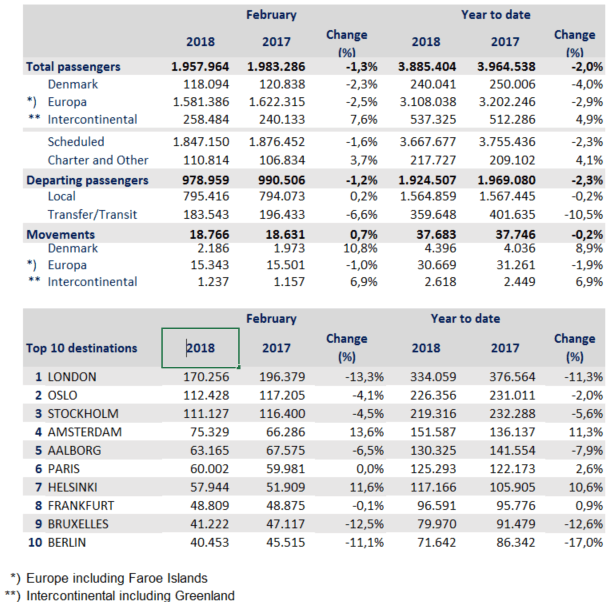